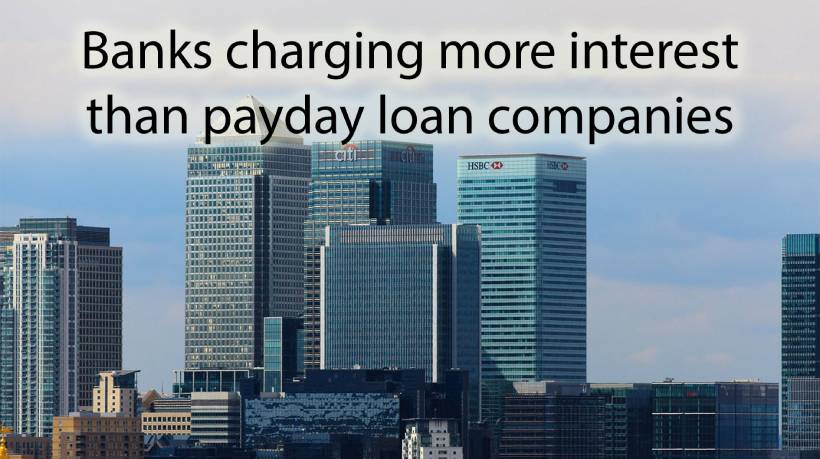 With payday loan companies constantly battling slanderous press, the banks have been laughing all the way to the bank – literally.

With millions of people constantly in debt, it was first raised in 2016 that a crackdown on overdraft charges was needed. One charity claimed that a “total of 2.1 million people spent the whole of 2016 stuck in the red, with many struggling to cover essentials like food, living costs and household bills”.

Following a two-year review by the regulator into other means of high-cost short-term borrowing such as rent-to-own, doorstep lending and catalogue shopping. The FCA has announced that they will carry out a detailed assessment of the impact that an interest cap, similar to fast loans, could have on these sectors, and how it will be structured and rolled out. However, such a cap on interest charged would not be in place before April 2019.

The success of the cap that was introduced into the payday loan sector in 2015 limiting the amount of interest that could be charged on quick loans, was recently reported on in the Guardian whilst discussing the regulator’s new considerations;

“Our research shows a cap on these loans would save people £185m and help stop debts spiralling out of control. The payday loan cap has been a remarkable success and led to a dramatic reduction in the number of people we see with problem debts from these loans.”

However, the financial regulator has confirmed that they will not rush to impose the same restrictions on bank overdrafts despite being raised as a concern in 2016.

So how much are the banks actually charging for overdrafts?

Following concerns about the interest and charges applied by banks, research was carried out by Which?. They investigated the costs of a payday loan, borrowing £100 over the period of 30 days, and compared that to the costs of an unarranged overdraft for the same period and amount, across 16 of the high street banks.

It was found that 13 of the banks had actually charged more interest than a payday loan lender and in several cases “considerably more” by up to 7 times higher the amount of interest.

The cap on charges to borrow quick payday loans means that no more than £24 of interest could be charged for a £100 loan borrowed over 30 days. Yet the investigation carried out by Which? found that Santander had charged higher than this amount and was the worst offender in the investigation.

The bank charged a disgraceful £179 for an unarranged overdraft of £100 over 30 days, seven times the amount higher than a payday loan.

Consumers who enter into an unarranged overdraft, could be seen as people who are suffering from financial hardship – so how do the banks get away with these charges?

The investigation by Which? was also backed by MPs who pressed the regulator to review the charges applied by banks along with other high-cost short-term creditors, to help reduce the total number of people in debt.

StepChange one of the UK’s debt charities had also confirmed statistics that a total of 49.8% of the charity’s clients have an overdraft debt and owe an average £1,722. It was also raised by StepChange that many people could risk increasing their debt by the rapid accumulation of interest and charges applied by the banks for unarranged overdrafts. This also causes a lot of people to struggle to get out of the red.

In addition to this, in November 2017 other research was carried out by the Citizens Advice which found that as many as “six million people had their credit card limit increased in the last year without being asked. The research also showed that people who are least confident that they can pay back their debts are most likely to be given extra credit”.

Could the banks potentially be leading us to another financial crisis?

Whilst a cap on other means of high-cost short-term credit is a positive step in the right direction. After reports of personal borrowing being at the highest level since the financial crisis, we can’t help but feel let down by the FCA who will allow the banks to continue charging these extortionate fees.